↓
Home Menu ↓
Skip to primary content
Skip to secondary content
Home→Garry Oak Facts, their range and demise in the PNW

Despite all negatives, the Garry Oak can actually be considered as one of the most beautiful choices as a shade tree. Though slow growing, it casts only moderate shade and has a very deep and well-behaved root system.

Large specimens can be 75-100 feet height with trunks up to five feet in diameter. These trees can be 500 years old, and even smaller trees only 30 feet high can be 200 years old.

The other native oak in the Northwest is the California Black Oak. Q. kellogii Though faster growing, it is shorter lived, but as they will live some 200 or 300 the gardener should have little reason to complain.

I find it interesting that people plant fast growing, disease prone large trees such as Black Locust or Willow and chose to ignore the Oak. Not only do these trees drop equal or greater litter, their root systems are a total menace to the garden beneath.

Other Oak tree facts and Links

The largest White Oak tree is or was?

Oak trees are of major importance to both man and wildlife. Here in the Pacific Northwest The Garry Oak, Quercus Garryana is one of our most stately trees. It is also a food source or habitat zone for many wildlife species. Their acorns are highly critical when other foods are scarce. When the acorn crop fails many a linked wildlife species suffer. Squirrels and other rodents store their acorns for winter use, they in turn are preyed upon by other species. Deer also browse on the foliage and twigs and are preyed upon by the cougar.

In addition to food value, the heavy litter produced by the tree provides wildlife cover for a great many other plant species. The leaves and twigs are used by birds as nesting material.

We need to do much more as our wetlands, marshes and wild areas become ever more diminished. I used to live on Lulu Island, near Vancouver B.C. It was alluvial soil some fifty ft. thick, wonderful soil that once cherished a rich bio-diverse plant community. It then was farmed. Peas, Blueberries etc. I used to pick vegetables with my mother on those farms. Now it is Richmond, a huge city that has paved over most of those acreages. The same has occurred in the former dairy community of Sequim, WA.

Aside from paving over these areas we have as I am sure you post in your other blogs, we have increased noise pollution, cut off normal migrations of animal species and with the increase of our light pollution we have messed up the cycle of bats, frogs and so many other creatures. One of which is myself. I used to have a clear sky to observe the heavens. No more.

One added petulance of mans intrusion … we have sucked up the groundwater! Our water table used to be 25 ft. It is now 75 ft. Few tree roots penetrate more than 50 ft. so they begin to die.The developer brings in an arborist who certifies that these are dying trees. Sick, dangerous and should be cut down. They will not live much longer. The city council agrees! So go our own Garry Oaks. 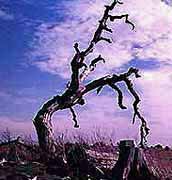 ”One single oak tree carries 200 different species of insects.” In my own case the Garry Oak was the dominant tree species in our prairie dry land forest. Its success or failure affects near as many plant species that once congregated beneath these beautiful trees. When they are gone, the insects once dependent on these trees go as well, and with the loss of those pollinators so go the smaller things. I once wrote an article on what Victoria B.C. did to a small Garry Oak forest. I will most likely post it.

That action and others by this “Garden city” has kept me from ever going there again, even though I am but a ferry ride away.

While I regret to be on a semi-rant ending here. I will also add this comment. Buchart Gardens in Victoria is incredibly beautiful. That I will admit. However, look for one insect, they are near gone. The spraying done at dawn before visitors arrive is massive in this and many other of these moneymaking show gardens.

Instead of looking at the flowers, gardeners should equally be looking for the missing bugs and creatures!

It remains my hope that the Nature Conservancy works to save or expand some of the few remaining Garry Oak meadows. Some of the Gulf Stream Islands or areas in the Cowichan valley seem to be the best opportunities to preserve this ecosystem.

Restoring some damaged acreages is more of a resurrection than a restoration. Still given a chance, these meadows and the prior ecology associated with them can be re-created. First the acreages need to be cleaned of foreign species*, deer controlled so as not to eat the young seedlings. With the replanting and caring of the Oak, many of the other odd species will pop up … some may have to be collected, propagated and re-introduced into this community. Slowly but surely all these species will begin to thrive and the butterflies, the birds and other wildlife will find the raw materials to return.

Garry Oak meadows don’t come in a seed mix like lawn seed. Their re-introduction will be difficult and time consuming. Each new ingredient to this ‘meadow’ added pinch by pinch. If you are lucky enough to own one of these meadows, please do more research on them, search out others, take not of what grows there and try to add those species to your own.

You might carefully (and light fingered-ly) collect some seed, or better yet, take notes and purchase the seed or the plant from a source handling these wildflowers. Your own meadow may only have a couple of dozen species, a beginner’s meadow … an invite to catalog and introduce more.

The planting of a prairie involves the correct identification and eradication of grasses and or of plants that do not belong there. These need to be removed — read the notes below. All other shrubs need to be encouraged, tree seedlings well protected and watered during the first years.

*Clearing of non-native materials. This is an incredible task. It is hard work that involves spring rooting out of plants by hand, or by tilling, and continuing to do so at near by-monthly intervals until fall … and most possibly into the second summer as well. One other option being the use of chemicals such as gylphosate, which has little poisonous effect on the soil, does not persist and is the least toxic to animals.

I hope all of this helps and encourages you to begin somewhere.
In their protection and or resurrection, we too, do our part to enrich this garden called Earth, and what it might be…