Moles, Pocket Gophers and Mt. Beavers – How to kill them?

In the Pacific Northwest, we also have Mt. Beavers, and not only do they act like tree climbing marmots, these big toothed gophers climb trees and can fall rhododendrons, holly … you name it. They even ate a poisonous Yew...

I tried using propane fuel to inject into the holes, poisons what not. Nothing worked. Oh yes, one tosses in a match to blow the hole up! Now I had a more inventive friend of mine, a former railroad engineer and he suggested that adding oxygen to the mix would increase the explosive power. He then explained how Acetylene was far better than propane.

So with this edit Wayne dragged the welding tanks to the holes and topped them up. Tanks and bodies retreating we tossed in the match … and the whole damn garden erupted like Vesuvius. I never did that again.

Wayne then proceeded to rig the holes up with miniature electric chairs.  That did not work either! ( I will leave his final attempt alone as it involved something the NRA would have lovedl) It too failed and in modern terminology it would have been underground EFP’s. ( I 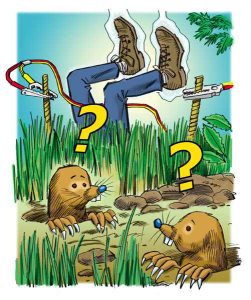 Now Peta and animal rights groups will probably fire bomb my home for this inexpensive but working solution for moles. Use a deep dibble stick to drill a hole to the gopher/mole hole and add a Tbs. of LYE, (Drano) throw in a Juicy fruit gum and I guarantee you results. Cover the hole with dirt or it won’t work. Cruel Yes, but so are the blood thinners in the poisons … and they can work their way into the food chain. No other answers!

STRONG EDIT: Lye is a dangerous substance, do not get any on you or in your eyes. Do not apply when children or pets are around and always put dirt over the hole.

COMMENT I received on the above “Wow, you are quite the environmentalist.”

Thanks. I appreciate that! 😎

One does what one can. When a gardener is hired to take care of a property and finds 100 plus molehills sorta ruining the picture, environmentalism goes out the window.

Moles actually are a good indicator of the health of the soil and the presence of food, worms, root weevils and lawn grubs.

Sadly the lawn owner does not appreciate their beneficial efforts, nor do I see a landscape advantage in having these earthy upheavals in my garden plan. I dare say my further article on my dealings with them would shock you.

Actually, I am an environmentalist and so is Wayne, the guy with the acetylene tank, but sometimes one just snaps. One other thing, these runs invite other tenants as well — some that can eat or damage the plants or bulbs. Read mice, voles and rats … and there goes the neighborhood..

Now on mice I do have an organic treatment. Simply leave a (covered-rain proof) supply of instant-flaked potatoes out. Provide a basin of water nearby. The mice will eat the flakes, drink the water and EXPAND! No side effects to the raptors or other critters who will find the stuffed dead mice. Much better than the blood thinner baits that can go into the food chain!

I still haven’t put out the deer traps yet. Such a nice guy am I!

One commentator asked “why the Juicy fruit?”
Actually, the lye seems to work by itself. The Juicy-fruit was another old-time cure. It would ‘gum’ them up. With hard economic times I have forgone the juicy fruit.

At a Tbs. per hole one 6.95 can of the aforementioned can treat some thirty mounds. It works. Forget about the hair and other methods.

One possible alternative being the swipes one puts in a dryer to loosen and freshen their clothes. This does seem to drive them away … but does not kill them.

Remember to cover the hole up again after putting in the Drano.

The Drano has another plus side, it might get rid of the varmints that take over the runs like rats as well. Most of my runs are at least 10 inches deep and if well covered, I doubt that any pet, like cats would dig down to get them. A decomposing mole has a very obnoxious smell and the creature itself is rarely hunted as it is not prime meat for other carnivores. Skunks maybe?

That said, one should remember that much more damage results from the next tenants, ground squirrels, mice, voles, rats etc. 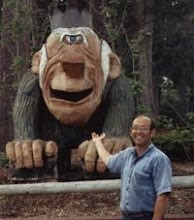 This thread has potential problems. I got a neutral by a Peta person on my eBay shipment because I used fleece to insulate the plants. EEK! I just see the commercial gopher bombs as not working and some of my acetylene torch ideas not being easy to access. In CA. we used some sort of mechanical tube attachment to the lawn mower. One unscrewed the exhaust and screwed in the replacement hose. Carbon monoxide works. Again no danger to the upstream food chain.

A TESTIMONIAL! – from Old Granny.

“I have been using lye for the last 4 years. I have gone from 30 molehills in the yard and more than that in the garden spot to one mole hill about every 4 days. Sometimes I pour in the dry powder, other times I run about a cup of water down the hole to wash the lye to the very bottom. I have more vole runners in the garden this year than ever. We live in the country and have a pasture on one side of the garden spot. I put lye in the vole runners, but I still seem to have new ones coming all the time. When the gophers start in on the bottom of a parsnip, I pull it up, dip it in lye and put it back in the ground. That works.”

She goes on to add:

“When the gophers start in on the bottom of a parsnip, I pull it up, dip it in lye and put it back in the ground. That works.”

Brings me back to that aluminum muffler gizmo that you attached to your lawn mower (muffler removed). It had a fitting to which a short hose could be attached and you stuck it in the hole. Silently effective.

Still not as good as blowing up the back forty with acetylene and oxygen.

Now I got into the ‘bunnies’ and rabbit deletion question. OH MY!

God knows I do not want to get into this kettle of worms. One of the B.C. Universities was set to capture and euthanize the pests. It led to incredible outrage by the public.

Upshot being that they are going to trap and transport the creatures to some refuge center in Texas. How sustainable is this? Bunnies can live to be a good geriatric age. What do you do next year?

IMO culling with a bullet is humane, but of course this option is outlawed in most municipalities. With the Pine Bark Beetle … I would suggest sterilizing males as they did with the fruit flies in CA decades ago. Adopt a sterilized MALE rabbit and let him go. He may continue to do damage to the garden but the ensuing rabbit offspring might never materialize.

After seeing the damage done on one of our Gulf Islands, I see no problem in humanely culling them. Plants and habitat need protection too.

Will it work? Who knows. Better than poisons that some people resort to. This answer is beyond any justification. Poisoning an animal is cruel, against the law and passes the poison on to other raptors or ground predators.

Killing any creature hurts me, but if I do so, I try to do it humanely. The State of WA, recently passed a law to prohibit the use of killing traps (aka the mole.) That left poisoning or gassing as the only LEGAL means of eradicating them. I think the mole trap was far more humane, if I can use that word.

Another comment: “hmm, lighting the propane would be give you 2 benefits…kill the moles and turn the ground, ready for a garden. Look forward to trying the lye. We’ve kept our Ace Hardware in business the last month trying everything on the shelf to get rid of moles.”

My response: Propane never did work that well unless you could introduce oxygen as well. Might also do a number on underground wiring such as for sprinkler systems. The screw in muffler attachment to the lawnmower seemed to work as well as any. The gas bombs sold etc. are near worthless.

Lye introduced into the tunnel with a lure is the cheapest defense. That said, most mole traps have poorly designed triggers and when enlarged seem to work better.

“Ever hear of CINCH Traps? I won’t put the link in here for spam reasons but CINCH Traps have been used by consumers, farmers and professional trappers for the last century. CINCH Traps is one of the leaders in mole and gopher control and has been a trusted brand since its establishment in 1909.”