In general weather predictions made to the public do not go out on the limb. Nor are they always very dependable.

I on the other hand, always go out on the limb and am always dependable. My guess for this winter is firmly based upon my intuition, wishes and dreams.

Winter will hit the Pacific Northwest in December.
I have largely based this prediction on a few events that have occurred or did not, during this month of August.

LAugust fogs are a famous Pacific Northwest weather prognostication tool. The more foggy mornings you have in August correlates directly to the number and severity of snowfalls you can expect in winter. The thicker the fog (the doesn’t burn off kind) the deeper and more severe the white stuff. This August we have had at few foggy days and August and it has been HOT!.

ANTHILLS  The higher the anthill the more severe the winter. The same for wasp nests. If they are constructed higher than normal, the winter will be long and harsh. Anthills have been lazy and squat this year.

THE SQUIRREL It will be a cold and snowy winter: if you observe squirrels accumulating huge stores of nuts. The same applies if they start attacking you. Since we are squirrel impaired in Sequim and near nut less this is not a factor in my equation.

THE MANGE EQUATION Should the hair buildup on your dog or horse or self become thick early in the season it will be a hard winter. After seeing the sneaky photo that a friend of mine took of me – it’s going to be real ugly. That was a hell of a winter! Now, I am near Hairfree. So???

THE OLD FARMER’S ALMANAC After twenty years in the Pacific Northwest I have bought it, only to go contrary to whatever they have forecast. This has proven to be correct more often than not.

THE WOOLY WORM FORECAST Little known is the scientific fact that each wooly worm has 13 sections which represent each week of winter. A black line indicates a cold and snowy week. Gold-brown lines indicate warmer weather. Check out the worm nearest you.

THE NATIONAL WEATHER SERVICE
NOAA
El Nino baby! No more La Nina. Prey for snow Vancouver. 1010 Winter Olympics.Yup, I forcast a much  milder but rainy  Pacific Northwet, and that was before I looked at Noah.

All of the above contribute to my late winter forecast. The context being a low woodpile and a fear that I might be wrong. Last year's winter was everything I expected and I still did not have enough of a woodpile.

If the above conversations encourage you to take note of nature’s signs, all the merrier – for sometimes these nature observations lead to a great many other discoveries – all the more wonderful.

I hope you will add your own weather predicting tools to this little tale.
Which do you believe in and which  not? Please add your own regional forecast predictors.

I hope you will add your own weather predicting tools to this little tale.
Which do you believe in and which not? Please add your own regional forecast predictors.

YUP, one more thing. I asked a Native American what his bones were telling him, and how did Native Americans predict the coming winter. He looked at me deadpan, and replied -- "By how high the White man stacks his firewood." Guess I will start chopping, just in case. 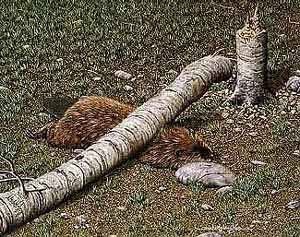 (If any article could use folk tales and weather lore this is it!  Please make a comment so I can add to the story!)