Rewild Native plants – be it the Greater Camas, Camassia leichtlinii (Native to the Willamette Valley) or the native Camassia quamash these large bulbs will be 2.00 each this month until I pot them up three to a gallon for next year’s sales.

Camassia leichtlinii, or Leichtlin’s camass, is a spring-flowering bulbous perennial that grows on moist slopes and moist mountain meadows west of the Cascades and Sierras from British Columbia to southern California. All varieties of Camas are easy to grow and are one of our most beautiful and recognizable native wildflowers. Long leaves that resemble grass will produce clusters of starry, lily-like flowers, usually a bright blue but may vary in color from deep purple to light lavender, and sometimes even white. I will have a few white starts by next year. The bulbs of camassia are edible, although of questionable taste.  Camas once clothed Oregon pastures and valleys with waves of color but as in Sequim, aside from some small pockets in wetlands and roadsides, settlement and agriculture took most of them out. Some stands can still be seen in the pullover rest stops along I-5,

Camassia quamash is the more common variety and produces showy flowers much enjoyed by bumblebees, mason bees, hoverflies, and beetles. This is an easy to naturalize Olympic Peninsula native, and can still be found growing in moist meadows. This workhorse camas is an excellent choice for any landscape and naturalizes well. The Yellow anthers is one way to separate this one from other forms and blooms in May and June. Both forms are deer and RODENT resistant. If happy in its location I have found it will reseed itself, given a planting spot of light shade to full sun and ample spring moisture.

What is needed for them to succeed? Human free locations. 🙂 Open moist meadows, grasslands or the old upland prairies and pastures we used to have – some moisture during the growing season.

As they transplant best before their roots dry completely out. they need to be put in quickly after dividing (or purchasing), these are not the same as tulips or daffodils that can go stone dry. Much the same can be said for bulbs like Dierama, Fairy Wand or Angels Trumpet. Technically speaking these are CORMS, short underground plant stems often called pseudo-bulbs. Best transplanted in the Spring they do very, very badly dug up in the summer and thrown out to dry like Gladiolus which they resemble. So divided they usually do not make it. This was one bad bulb trade I made last year. Had they been kept in shade and transplanted immediately as these Camas they may have survived.

Like some bulbs, esp. lilies they also translocate future bulb production by screwing themselves downward in the soil. By means of contractile roots it will move to where IT wants to be. In pots, those you planted a year ago may end up at the bottom of the pot. In the ground the bulbs will move up or down to the level they desire to be.

I will also have SOME numbers of: 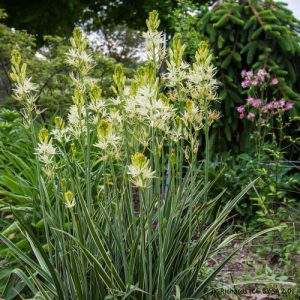