That still leaves a lot that people can do on a local level.
1. Plant pollinator-friendly plants, both for nectar and for pollen. **
2. Be super careful in using any pesticide and attempt to find organic alternatives – or live with the problem – often nature will step in and solve the temporary imbalance.

3. Learn to value weeds – Dandelions, clovers, Veronica, fireweed, thistle loosestrife, milkweed, goldenrod and other flowering weeds are crucial food sources for bees. In urban areas filled with sprawling lawns, dandelions and clovers are often lifesaving oases for bees.  Deadhead when they have finished their bloom and before they go to seed – sometimes not – seed heads of asters are what hummingbirds make nests out of. Other plants such as nettle are great bee plants.

4. Plague your legislators to support policies like the Pollinator Recovery Act and fight this administration if it becomes one more Obama legacy Trump tries to kill.

5. Get your community involved and work to change the restrictive law regarding bees and even raising a few chickens. I say this because my small community of Sequim WA does not even allow a few Rooster less chickens to be raised. “We’ve removed ourselves so far from our food sources that the re-introduction of these practices seems odd and even worrisome to people who haven’t been exposed.” And it is those very same people who make the restrictive laws in what used to be a vibrant farming community.

6. Join a local bee club and support their efforts. Our own North Olympic Peninsula bee club has a great newsletter and informative Monthly meetings.

Most of all: Plant the following Bee nurturing gems if you can.

If you live in a milder climate zone you could add many S. African and Australian plants such as Grevillia and Bottlebrush. Fremontia a CA native was literally dripping with nectar and on my former hillside I had planted a riot of Grevillia (RED) and Ceanothus (BLUE) – Liberace would have been proud.

Bees are more active in gardens that provide at least 10 species of their favorite plants. Similarly, they ignore gardens with only one or two favorites. Highly manicured, heavily mulched gardens repel them. Providing a variety of flowering plants that provide successive flowering through spring, summer, and fall form the foundation of the insect-friendly garden. Remember, many of the same plants will also attract butterflies and hummingbirds.

In summary:  A balanced mix of native and exotic plants in a garden free from pesticides, keeps honey bees as well as native species foraging happily throughout the blooming seasons.

As this site progresses, I will further try to arrange the following plants month by month as they bloom in the Pacific Northwest. 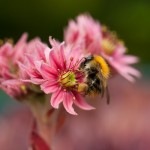 Honeybees further pollinate the normal vegetable garden – Sentient pumpkins ( see comment), squash, cucumbers, zucchini and these flowering vines, in turn provide a valuable food source for them. Bees acquire pollen for protein, vitamins, minerals and nectar for energy from these summer garden favorites. RED pollen – now where did that come from. 🙂

Both pollen and nectar are incredibly important and in short supply. Local pollen count by the day, just enter your Zip code.

Cottonwood, Eucalyptus, Willow esp. pussy willow. Pussy willow blooms are seen as the soft gray arrangements along the branch, but they are really the “bud” stage of the bloom.  Here on the right, we can see the yellow and red color of the actual flower stamens.

In the Pacific Northwest Cottonwood and Alder trees are a major supplier of pollen and in CA and elsewhere Eucalyptus fills the menu. Some bulbs and annual weeds also begin to bloom and provide pollen. Calluna,  Erica (heaths) are blooming.

MARCH:  is the month we all have been waiting for and in milder areas, Citrus is one of the first nectar-bearing trees. Many desert wildflowers and shrubs also begin – Mesquite being one. In the Pacific Northwest, we rely on the Ribies sangineum and Indian Plum (Oemleria.) The native Acer glabrum and circinatum provide great nectar flows and Dandelions provide both nectar and pollen.

APRIL: The earliest fruit trees to bloom would be the plums and if the weather is wet and unkind they sometimes will not get pollinated. Perhaps leaving the first blooming dandelions might be a good idea – pollen producer.  MAPLES be they the native or hybrid forms all are great pollen and nectar sources.  Hazel bushes including the contorted filbert are also heavy pollen producers. Crabapple, apples and plum are in full swing. Symporicarpos snowberry is an unnoticed native but provides nectar. 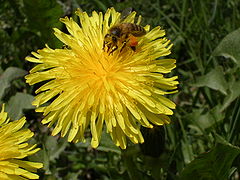 MAY: Apple and cherry trees are primary nectar trees in May and towards the end of the month bees will be attracted to the Pink Tamarisk which looks delightful with Ceanothus as does the Fremontia. Amelancher, (Serviceberry) Ribies sanguineum, Arbutus (Madrona) Flowering Quince and Laburnum are heavily visited for both pollen and nectar, so is Heather. Raspberries, Blueberries are finishing but Photinia and many other shrubs are coming into full bloom as are tons of perennials: Phlox, Lithodora,  poppies and many more.

JUNE: Honey Locust (Gleditzia), Holly, Ash are three heavily visited trees now. Later on, Walnut trees provide pollen and the feral Horse chestnut – RED pollen. If you are fortunate to have a LARGE property the Tulip tree Liriodendron tulipifera is an awesome honey producer as are the raspberries and even better the blackberries and
Gaulnettya Wisley Pearl,  Oxydendrum (Sourwood), Pernettya, Vaccinium (huckleberry). Madrona and dogwood are both good May/June nectar trees.

Oriental poppy and Opium poppy are producing tons of grey pollen in this month and into the next. Sorry – no opiate honey, it is all pollen. Same for HEMP which is wind pollinated. 🙂

JULY: Perovskia, Cosmos, Caryopteris, Coreopsis, Penstemon and many of the cultivated flowers come into play now as well as the Sequim famous lavender. Groundcover thymes are heavily visited.

AUGUST: Echinacea, Penstemon, continue to bloom, Epilobium augustifolium (Fireweed) and Thistle both are nectar producers. Solidago goldenrod begins as do the mints. Melissa officinalis (Beebalm) Monarda.  The Black Locust comes into flower in late JULY/AUGUST. Atlhea or Rose of Sharon is a great bee plant as is Abelia grandiflora. 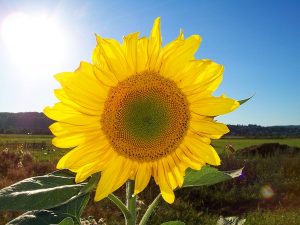 OTHER LINKS – other stories.

My bear and bee adventures – as in sometimes things go wrong.

Bees and pesticides – a link

How to make a lot more bees.

A web-based introduction to raising bees. Over 30 videos! 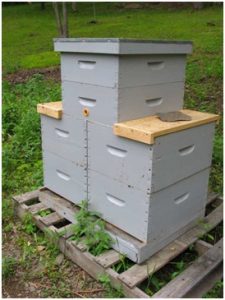 The link to Bayer above is but ONE of four videos regarding their culpability with insecticides.

“In 1992 Bayer was granted a license to use its systemic insecticide ‘Gaucho’ on Sunflowers and Maize in France. In 1994 more than 400,000 bee-colonies died within days of the sunflowers blooming; the beekeepers could actually watch bees dying on the sunflowers – as soon as they had drunk the nectar and collected the pollen. The ground beneath the sunflowers was ‘crunchy’ with dead bees -” The French govt. refused to act; the regulators refused to act; the food safety agency refused to act – and it took years for them to ban the use of this chemical. British and American agencies have not done the same.

Be sure to  visit our NOPBA wonderful archive of monthly Newsletters or visit the library that we loan out to our members. Also be sure to visit my page about Smart Meters and our local efforts to stop them.