A Sweet William once wrote that there was no plant he could not like. It was but a challenge offered to get to know them better — to grow closer to them. This is not me. I find that there are some plants I really don’t like. Could this be the same for relation- ships? Is this okay?
Signed, Bolax Glebaria

Dear Bolax, (One of my daughters.)

Relax, there are plenty of Gardens to Hide From, or matings never meant to see the light of day. I call these the unexpected “Dwellers Within.”

I offer my own favorite misplantings: 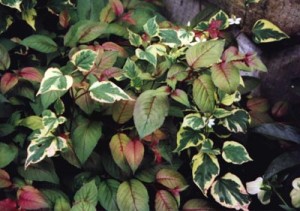 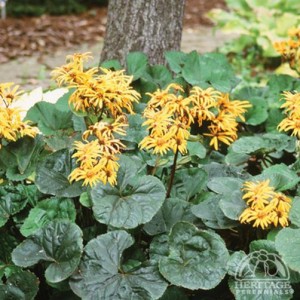 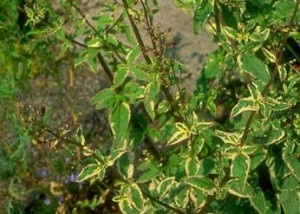 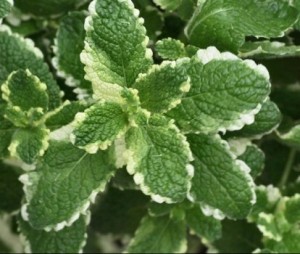 The ‘Bad Gardener’ has planted them with Scrophularia aquatica ‘Variegata, a transvestial Figwort that somewhere went awry. Its leaves are a travesty of green and white. Wait! I just noticed the appearance of Mentha variegata’s yellow and green. A ‘ménage’ a quatre’ like no other! Shall I plant them under the Devil’s club (Oplopanax horridus)

Is there a place in the garden for such trilling cacophony? The garden designed to be appealing is found to be appalling. Are there dwellers within that make these squarings happen?

For these ‘Dwellers On the Threshold’ are the melancholic placements we make as refuge from life’s more chirpy combinations. These are the places to enter when we really want to get morose. The sackcloth’s of your garden; there for you when you want to revel in vulgarity, tastelessness; or simply providing the needed codpiece when the unexpected and unwanted garden gawker comes to steal your precious revelations — the sapsuckers of the garden club.

That therapeutic curmudgeonly is worth the planting all in itself. The unexpected benefit is that you find,  by lying under these combinations for any period of time, that they  encourage you  to re-enter the more pleasant world all the more quickly.  Or as my friend Dumpster said, “It’s good sometimes to wear something we really don’t like.”

Sharing new vistas with Dumpster, whose lids are always closed is a special adventure. Opening  unseen cracks, stumbling, and  rediscovering old rakes forgotten in the grass make this garden one to limp away from!
Like offering to vacuum the sheets before the uninvited house guests come; every garden needs a spot to draw away from; a distancing needed to teach new perspectives. The garden bed entered into, with nothing expected – often finds the unexpected. Can that negatively be?
You see, I too want my garden to be odd – A toothache of a garden.

One discovers that some plants acquire distinction through their placement with other plants. Then one sees them as a point of view! Dwellers on the threshold are just that; to be carefully observed and best used in combinations or accents to the real garden. Penelope’s Garden is also a daily reminder that the garden outside our own needs attention!

“Dumpster” is a frequent contributor to Bindweed’s collisions of thought.” Since then he has moved to CA and has been replaced by Geranium Street Floral on Google+. She is an Echevaria lover and visiting Google sites I found these two poster children for ugliness. This is totally unfair as her own site is filled with tasteful creations and wondrous pictures of succulents. Sadly you have to join Google to view her special designs. 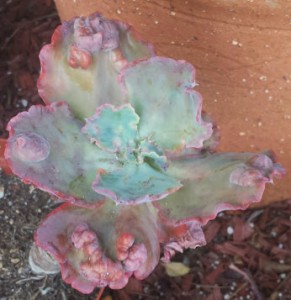 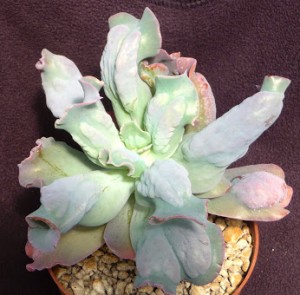 This is definitely a Will Rogers moment… ‘I never met an Echevaria that I didn’t like’ That is the nice thing about some cacti (I know this is not). Those with dense or hairy spines look great even when the plant is dead. This succulent looks like it belongs on the ‘Munsters.’ T.V. show. Failing that explanation it looks like it took too many drugs. Some virused plants just look ugly. These the cake. I’ve seen bacterial cankers that look better than this. Succulent cristations I love but the fleshy cankers on this does nothing for me. Perhaps useable in a “garden to run away from.”

ED. Penelope had a few bad morels that day. Fortunately, she recovered after inserting a few orange Imperial Fritillaries into the pink garden.) One local nursery, understanding the delicate and sometimes urgent needs of gardens like these, has even added a drive-through window. We suggest you just ask for the Bad Penelope’s McMelancholy special. There is a 20 % discount if the order is twice pronounced without a stumble.)

Further Note: When this was written Penelope’s had been hospitalized, but her recovery was vertically miraculous after they called in the British specialist Geof Hamilton. They exchanged stray thoughts on botanical variegants. Of Houtynnia cordata, he had this to say … “Planting it in a moist border is like inviting the Hell’s Angels to a choir outing.”

Upon hearing these words, Penelope grabbed her shears and took off, sheets flapping to the wind. She was last seen running down Newbury Street singing Tovara, Tovara. 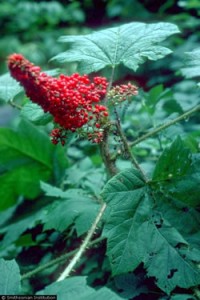 The Master Gardeners did pick her up shortly thereafter. It was a case of indecent exposure and assault with a deadly weapon. Go figure! I say she was simply trying to warn the public of two unattractive vagabonds. She’s now serving hard time and using Oplopanax horridus as toilet paper. She would appreciate your letters for obvious reasons.

Since this was written Geoff Hamilton, that wonderful  British Horticulturist has passed away, it was far too early and we shall all miss him!

(Dweller on the Threshold: The embodiment of ones greatest fears, known or unknown.) I cannot leave without adding a proper accoutrement to this garden. The fact that it was by my house entrance also served to limit visitations by some religious sects. 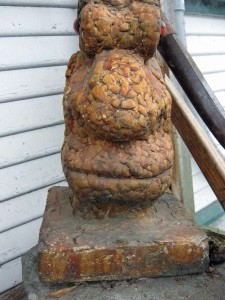