“European Bees and “its possible negative impact on native bees.”

Fewer people now raise bees than they did in the fifties or sixties during the ‘Mother Earth movement or when more rural farms existed. Beekeeping has become like most agro-businesses one that favors the large – the migratory beekeeper who makes his money from pollination, not from honey

In the 50’s we had close to 6 million beehive colonies and this has declined to just over 2.3 million. Add the issue that some of the people who ‘hobby’ this are just plain incompetent and that some of the large ‘competent’ (truck em all over) people consider them as cash cows and replaceable as they die from a disease they help create and spread.

WHO is going to guarantee that these parasites and pathogens will not spread to the native bees? They, unlike the modern hive, cannot simply be requeened!!!!

My greatest argument is that by their borg-like pollination of everything the non-native honey bee pollinates not native and invasive plants such as lantana, ice plant, and Scotch Broom. They further maintain and stabilize the introduced weeds such as European thistles such as yellow star thistle (Centaurea solstitialis), that might otherwise peter out. 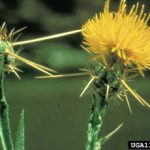