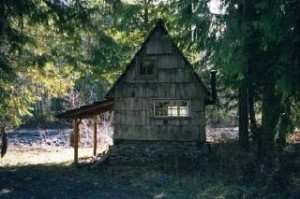 Jim is a kind employer and for six hours of work he lets me stay in this wonderful home.
Mind you this is every week! I keep offering to do more. 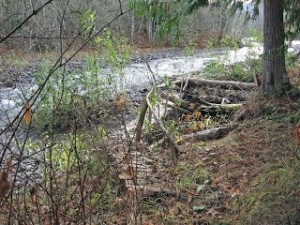 After visiting a friends home I simply had to post this. It is my ever so humble abode. Eat your heart out! The house overlooks the Dungeness River, and sometimes the kind river even washes the floor for me.
Free landscape revisions are a yearly joy! Life is GRAND!
Imagine my surprise, when my date complained about the bathroom It is a one seater and even has a clever urinal attachment. I find it very functional and provides woodland relief. Once in awhile I catch a sneaky fisherman using my facilities, but usually they put the toilet roll flat on the shelf again. I appreciate that! 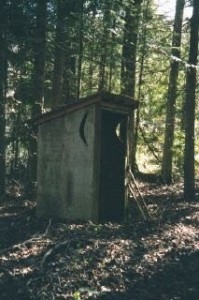 The assumption that I don’t know how to treat a lady still weighs heavily on me. Just a pond away is my bathtub. I take a plunge in it every month, even if I don’t need to. Did you know that there is a new pedicure treatment. Some Chinese fish in a tub. You stick your feet in and they nibble all the dead flesh away. It is supposed to tickle. What Pikers! You should check out the action when those trout start nibbling at your toes, or whatever might dangle. 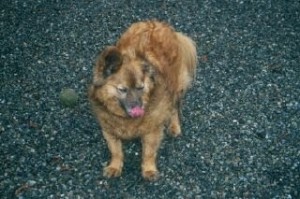 .
As Rex is rather skunky himself I find this works out really well. Rex was Jim’s dog. He was a very good dog. He was deaf, so he never listened or obeyed. He developed cataracts in his old age, but he always did his duty. Being underfoot!
It was a sad day when Jim planted him near the pond, but he has a very nice hand carved memorial, made by Jim and so it flows.

.
Sometimes it is a day to stay inside and install the drapes.A nosy gal pestered me to show the inside of the house.

I didn’t even open the door to my date, so why now? I guess it was the gift of her blanket.  Linus Pauling is my hero, so I plopped a picture of him above the stove to provide daily illumination. Alan Chadwick was also one of my giants. Sadly I never took a picture of him or the Garden he constructed at U.C.S.C. That would be my first rock wall building experience.  My last year at the University in 1971. This article brought back some memories – not all good. He was opinionated and cajoled and berated as much as he taught and counseled.. That said, it is sad to see what has happened to the garden and even the rock walls we had struggled to build. 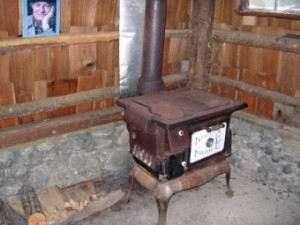 .
You will take note of the aluminum guard I put behind the wood stove. The insurance lady didn’t even give me a credit for that. Damn all insurance agents! 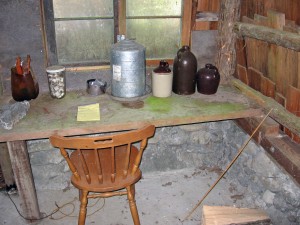 My breakfast counter. I  sometimes finger-pinch from Jim. Little does he know that I help myself to the trout food and the birdseed he left behind. I too need fiber in my diet. The hooch is my backup heat source. One year I made 60 gallons of it and froze it in my neighbor’s freezer. Through a long complicated method we further skimmed the least frozen liquids and by distilling made some high-grade apple brandy. These are my last jugs.The insurance agent pointed out the milk jug of diesel and fire starters. Some people simply are over careful and not easily bribed. I offered her the hooch.

I tend to collect old things. Railroad stuff like that. I have many saws like that. Cutting my winter firewood is a rather lengthy process.You may notice that next to the picture is my beginning attempt to convert to electricity. Being self-sufficient I do trap. 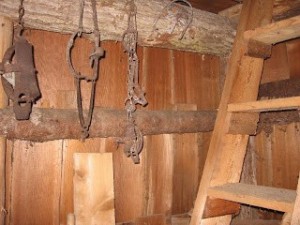 Moles provide me plenty of animal protein, as well as pelts for my winter coat and toupee. I also have a much larger deer trap. It is too large to bring in and I do admit to having left it open. It cut the poor lady from the Highlands and you saw how well that turned out. Are you outraged or shudder that I would construct a trap to kill deer?

Think about it. Who does more damage? Why is one more precious than the other? Moles have sleek, nice pelts and their skin stretches well for the making of smallish mole bonding drums. Deer are edible. Moles slightly less so. So why trap moles and not the other. People love cats. Cats kill birds, frogs, snakes and seedling flats. Not that I am suggesting or confessing to having owned a feline trap. Just a reminder that all the above are God’s creatures and that he did give us dominion over them.

I guess I will skip my special Chocolate Mole Sauce. Sweet Alyssum from Port Townsend already gave me a sharp edit on this. She runs a restaurant and has already rejected that sharing. Chung He, in this respect even lends me the use of her blender whenever I make my mole shakes. She just asks me to rinse it out afterward. That is fair.
Upstairs is the bedroom. You will note that I have slacked off from my former Monastic ways in that I laid down a rug. 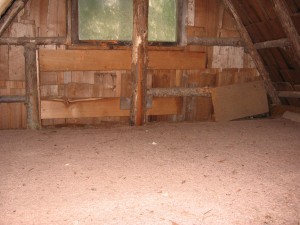 The old bones just can’t take the cold concrete as they did when I was at the Mt. Hermon Monastery near Santa Cruz.

I learned much about Abrahamistic religions while I attended. The flail helped keep my attention on the learning. I finally ran away from them, taking refuge in the fabled Ivory tower of University. I learned much there as well. The former Secretary of Education labeled U.C.S.C as a mongrel cross between a brothel and a hippie commune. I think he meant to insult us.
I ran away once before. I was 16 and decided to get out of Dodge. I ended up working for Volunteers of America. Upon arriving, I was to call to be collected. While I was in the phone booth, someone took off with both of my suitcases. Everything that I owned — except my small backpack. They took me to the Salvation Army and re-outfitted me.

In hindsight I suspect that those two summers gave me the most karmic mileage points than most other things I have ever done. We worked with emotionally and physically abused children and was very good at what I did. I did have one minor difficulty. It was very devout agency and insisted that every counselor give a sermon under their majestic outdoor chapel. Yup, you guessed it – My turn had arrived. In my backpack was a book on Hinduism. I simply inserted it in front of the bible and began reading one especially juicy and warlike part. I also inserted Christian comparable for every Vishnu, Brahma and my ever beloved Siva. I ad-libbed something or other for the Monkey God. 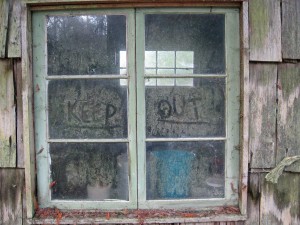 I know I have strayed far from my home description, but I tell this tail just to re-assure people that I am a very spiritual man. I really did end up hanging Drapes. I did so for Chung He. I was so taken by the task, that I extended it for the cabin as well. I began cutting up the Sackcloth blanket she had given me as my X-mass bonus.

Jim didn’t know this, but his wife has often given me a tidbit extra. Just today, she sent me home with two (BIG) bowls of Seaweed soup. Another favorite recipe of mine.

Many years ago, she trained Rex and me together. Korean women are very frugal. All it cost her extra was a larger bag of treats. She still makes me clean off my toenails before I enter the house. Korean women, are that way. Only one other woman in my life trained me better. Sadly, I have badly lapsed from all those enlightenment’s.