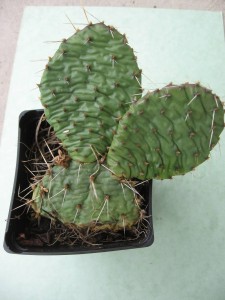 I used to grow one other more nondescript Opuntia, but I lost my text on it. So I will do an edit on this one. I got this Nebraska native and it ranges up into Saskatchewan CA and throughout most of the U.S. It is totally hardy..

A squat toady of a cactus rarely venturing above one foot. In the winter it gets all crinkled up looking like it needs wrinkle cream. This actually is a survival tool, as the extra skin on the pads can swell after being frozen and have enough elasticity to survive below zero degree temperatures. In the spring and summer it plumps up and is quite attractive. Flowers are a pale yellow

Opuntia fragilis is distributed widely throughout North America. It is the only cactus species native to western Washington.

It used to be widely distributed in the areas found within the Olympic Rain shadow. Sequim, Pt. Townsend and the San Juan Islands. In British Columbia, the plants can be found in the Gulf Islands in the Strait of Georgia.

To those familiar with the large, shrub-like prickly pears of Arizona, Opuntia fragilis would hardly be recognized as a close relative of those impressive plants, but indeed it is! However, it has much smaller pads than most Opuntia species, usually just 1 – 2″ long or occasionally a little longer. The pads are “fat” and can be cylindrical to slightly flattened in shape. Some older references state that the pads are invariably cylindrical, but a thorough inspection of a sample of wild O. fragilis plants will reveal that this definition is too narrow. The pads have spines that may be rather soft and white to more rigid and somewhat golden or brownish in color. The spine color also varies according to the time of year. In June, yellow flowers are produced, but some forms of this species are rather shy to flower.

The names “fragilis” and “Brittle Prickly Pear” are assigned to this plant for a reason; that is, the pad joints are very brittle and apt to break with very little force. With this in mind, and also considering the pads are so small, the plant is seldom able to grow taller than about 6″. Most frequently, it forms broad, low mats on sunny, dry south or southwest facing slopes with gravelly or sandy soil. It is at its best in isolated areas where competition from other plants is minimal.

It blooms but infrequently, as its distribution pattern seems to be from broken off pads. This I can attest to, as I battle with crows all the time. These vicious winged devils routinely come down to pull small pots out of their flats, steal the tags and leave them scattered all over. I HATE them! I finally chili powdered all of these flats, and sprayed them with Cayenne pepper as well.

They moved on to my Cacti flats, and damn it … they stole a couple! When I told that to a friend of mine, she laughed and said that they had just gotten stuck to their feathers. So off they flew with my little cacti attached and now they assuredly have a new home.

Opuntia fragilis was once more common in my own Sequim area, but now is very rare and their seems to be little interest in preserving this unique cactus. The San Juan Islands are doing a much better job of it. Perhaps it is the San Juan Island rabbits distributing the plants around. 🙂 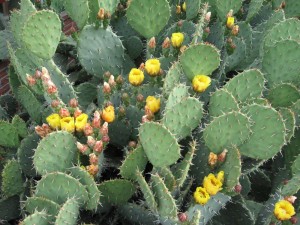 This Opuntia is hardy in Zone 7 Sequim, WA. But relishes our dry winters. Sequim, only gets some 15 inches of rainfall a year and happens to be in a mild climate zone. Rarely do we drop down to 10. F. Adding 6 inches of coarse gravel to the potting area would be a good thing to do. Plant under an overhang, facing south. Great protective landscape plant to put under opening windows.

PLANTING INFO …… Zones 8 and higher   Do check out my favorite indoor Cacti!