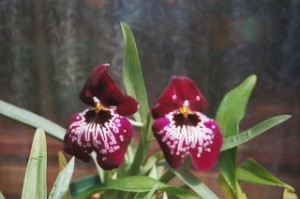 .
The use of Neem Oil and or other bio-friendly alternatives to synthetic chemical pesticides — such as this greenhouse Miltonia.
There are many paths that can be taken to better connect and deal with our environment in more wholesome ways; the time is now! As gardeners we too abuse the environment, often by the poisons and chemicals we overuse in the garden or in the greenhouse. We can no longer continue this ignorant abuse.

Multi-national companies manipulating plant genes to be resistant to pests and to herbicides such as Roundup seems to be the government approved answer to improving agricultural yields — the irresistible Monsanto wave of the future. Or is there a better alternative?

Neem oil and other organic materials may be but one of those answers. We are approaching a new millennium and perhaps an investigation into these simpler and more earth friendly alternatives may yet propel us into creating a cleaner and more sustaining environment.

WHERE DOES NEEM OIL COME FROM?

Neem oil is the pressed product of the seed of the neem tree (Azadiracta indica Juss.)This tree is indigenous to the tropical dry and deciduous forests of India, Pakistan and Burma at elevations to 1500 meters. It is a beautiful tree that grows some 20-30 m tall, to 2.5 m in girth, and has a broad rounded crown of dark-green foliage. The flowers are fragrant and is a nectar provider for bees . The western boundary for the species seems to be in the eastern mountains of Iran. The tree can also be grown in the milder areas of the United States. It is capable of withstanding mild freezes and is presently being grown in southern coastal California and in Florida.

More exciting is that this is a potential cash crop for many areas of Africa. The tree will grow under adverse hot and dry conditions as long as there is an accessible water table. In such countries it may also help reclaim mined lands as it is nitrogen fixing and will grow on degraded and acidified soils. It also has value as a windbreak, and appears to have exceptional merit as a city tree. For further information, one of the finest sites on this tree can be found here.

Australia is a leading planter of such neem trees and tens of thousands of trees have been planted in plantations for commercial use. Dr Martin Rice, of the University of Queensland, stated that Australia is set to planting millions of the tree by the end of the century. “Twenty-five to fifty million would be needed to replace most of our imported toxic pesticides” Is this the answer to the chemical companies that develop herbicides and who are now altering the food crops to be resistant to their own herbicides? I believe so

The Neem tree has been cultivated in India for more than four thousand of years and has been used in ayurvedic medicine and animal vet medicines. Neem makes an excellent insect control on crops and livestock such as cattle and sheep. One of its original applications was to insert twigs or leaves into areas of planting to control pests. It is also presently rendered into extracts that can be sprayed onto crops. There seems to be little effect to beneficial insects or on birds, it also biodegrades in a matter of weeks.

Because Neem products are also used for human consumption from head lice to diabetes, exposure to neem poses no documented threat to the applicator. In the 1995 EPA ruling, the agency established an exemption from the requirement of residue tolerances and established neem as “a broad-spectrum fungicide /insecticide / miticide on all greenhouse and terrestrial food crops.” This regulation basically eliminated the need to establish a maximum permissible level for residues of this product on greenhouse or food crops.

Neem extract antifeedent and growth regulator properties have been linked to be a control on over 200 different insect species. Several of these are already resistant to chemical pesticides. Usually insects rapidly develop resistance to conventional pesticides and as a result ever more is needed to be sprayed, moreover beneficial insects are also killed in this indiscriminate killing. It is reported by the industry “that there are no recorded cases of insect pests ever having developed a resistance to neem. This fact is worth repeating, even more so the surprising nontoxic effects to birds, mammals and beneficial predators such as wasps, spiders and ladybugs.”
I think not, that it cannot affect or harm ladybugs, frogs, or predacious mites, yet kill the problem ones is a stretch for me. In most cases some of these predacious insects are even more susceptible to insecticides. Hype aware alert!

Neem’s antifeedant properties even effect snails and has been shown to have success in combating fungal problems as well. It is usually used as a foliar spray, but for optimum benefits it should be watered into the root area as well. This procedure I have done with orchid’s like the Miltonia (above) that had been seriously infected with mealy bugs and scale. I would further caution all who buy this product to buy small amounts. My experience with the life expectancy is that it does deteriorate if not used within the year. Storage is crucial as well. All too often I see gardeners store their chemicals in the greenhouse or in another uncool site. Please read my other post on Misapplication of chemicals. The use of a safe liquid soap or a soybean activated nonionic surfactant will also help the efficacy of the application.

That said, I found it to be a failure (as were most insecticides) in regards to the root mealy bug. Liquid drenches, simply cannot coat all the bark surfaces in an orchid soil mix. We finally had to soak all the plants in tubs filled with the chemical choice. It was a matter of leaning over a tub of toxic fumes, or over that noxious smell of Neem oil. Trust me on this, do not spray or use Neem oil if you plan to go out on a date..

Antifeedant properties can be loosely described as when a substance discourages insect feeding but does not directly kill the insect. but acts in a longer torturous way. Neem -Azadirachtin also acts by creating hormonal disruptions and blocking their endocrine systems, which prevent the insect from feeding, breeding, or metamorphosing/molting.

By utilizing such environmentally friendly pesticide policies we also help to preserve our own quality of life. Practicing organic Pest Control Management and utilizing products such as Neem may yet save us from the ever growing over-dependency on chemical pesticides and genetically altered food sources.

For more information on neem see the website for the Neem Foundation or from an email I just received forestry.about.com