SHOW ME THE HONEY

Before I comment on this interesting subject I will revisit the basics. Pollinating insects basically find food (rewards of pollen and nectar) by smell and color!!!

Generally bees SEE the lower frequency colors such as blue purple, violet, white and yellow. The more infrared shades of reds they generally leave alone. Orange seems to be a division point. Flower SIZE is not important although modern genetically hybridized double forms of flowers, be it Peony or Shasta Daisy are ignored in preference to species types that present and do not hide the pollen on the anthers. Interestingly beetles are attracted to dull colored, greenish colors as well as the white. 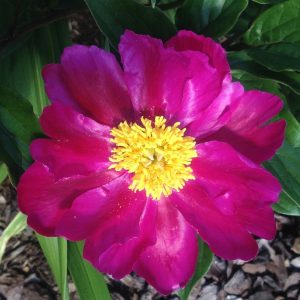 Can bees SMELL? This is often overlooked in discussions about the bee and the flower. Bees certainly can smell and surprisingly do so better than even fruit flies or mosquitoes that have their own strong abilities to sniff out opportunities. Bees smell food, each other, activities and pheromones in their hive. The health of their queen, danger signals and the needs of the larvae. They have more than twice the odorant receptors of the above, generally a better sense of smell than other insects making them a successful up comer in the world of pollination. Working with ones hives one can see the changes when a forest fire creates smog barriers for the bee trying in vain to search out for food.

Now FLOWERS are not always pleasantly fragrant. Odors can be very unpleasing including those of decay or fermentation. Beetles certainly are attracted to some of these stronger scents as are flies. What I have never understood is the fragrance of the ROOTS of plants such as Magnolias or Erigeron. Are they fragrant to attract the larval beetle that is their normal pollinator? There are fewer plants pollinated primarily by beetles but some of them actually deter the pollination by others.

IMO, Long-distance attractants of fragrance have much more to do with the sight issue of pollinators. Bees find nectar by sight and odor, but there are other factors as well.

Pollen load and heat, as well as the protein level of the pollen.

Most pollinators need pollen, be they colony insects like the bee or solitary pollinators such as the Mason bee or beetle. Pollen needs to be accessible and plentiful enough that some remains to pollinate the flower after the pollinator is gone. Be it beetle, bee, fly or moth, the insect and the flower have evolved to work together.

Another interesting flower adaption is the creation of flowers that not only attract a pollinator but sometimes provides a safe refuge. Be it by size or heat, some flowers use heat to reward pollination. In addition to providing a survival niche for a cold insect they also can be refuges from other predatory insects or birds. 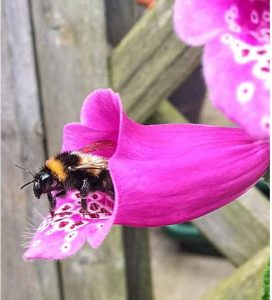 The foxglove and bumble bee example in this article. Now no matter how clever the foxglove has been in trying to operate the pollen and nectar bar for the insect quite often the bumble may decide “Enough of that.” Lets dance!!!

The plant may try to regulate the bee, but it is not always the entire story. and the head beating wasp of Australia also shows its impatience with the flower. “Pollen flies to the wind as this Australian Blue Banded Bee head bangs the flower with 350 head-bangs each second. A unique, ‘heavy metal’ approach to pollination.“ 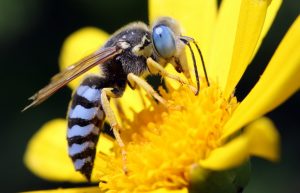 Pollen is expensive to produce for the plant, vs nectar means it needs to develop a cost effective plan to get pollinated. Most bees such as the solitaries – masons are not in it for the long run storage of food as do colony insects like bees, so they bust their little butts collecting pollen, often doing a better job at it as well.

Is it that plants have evolved to match the tongues of visiting insects or that the more mobile insects have evolved tongues and traits to make the local food source more available? Easily done considering the generational quickness of evolution for insects vs. the slower plant.

Mutualism between plant and insect is a term defining a relationship in which both species are mutually benefited. A good example being the Acacia Ant and the thorny bullhorn acacia. “The plant provides food and shelter to the ants and the ants defend the plant against browsing animals.”

Yucca moths fall into the same category. They are dependent upon the Yucca plants and vice versa. “Yucca moths (Tegeticula) are dependent on yucca plants (Yucca) and vice versa: the moth acts as pollinator at the same time that she lays her eggs in the seedpods of the yucca; the larvae hatch and feed on some but not all the seeds. Both organisms benefit: the plant is pollinated, and the moth has a source of food for its larvae.”

Plants that have evolved to be pollinated seem to be driven by the availability of the pollinator. For instance, fly pollinated flowers may be yellows-green while the orchid has evolved to be pollinated by bees. Flowers are typical bright blue or purple. Change of blossom color such as in the rich blue of the Tradescantia that fades to a pale pink or white further signals to the bee that here are flowers with rewards. Usually pollen. Please visit here first and then I will provide a further reward by producing nectar to take home. The colony insect will always fall for this. Visiting the pale white flowers is the plants guidepost that (blue is good, white is not) – Don’t waste your time where nothing is there for you. Plant pollinator interactions between insect and flowers usually are mutually beneficial but sometimes can simply be nectar stealing without pollinating.

The foxglove has engineered its pollination so the bee needs to pollinate it before coming to drink the reward of the nectar. The bumble bee however bites through the base of the flower, stealing the nectar without pollinating the plant. Sometimes they get their heads overly stuck into what they are doing. 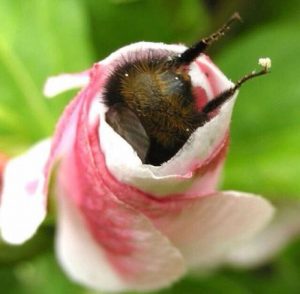 Sometimes plants play the same trick on the insect.  The early purple orchid produces flowers that mimic those of Corydalis a wonderful nectar producer. In the visitation it deposits a packet of pollen on the bee’s forehead, yet it has no nectar to offer.

Even more amazing is the incredible evolution of pitcher plant growing stalks way above the acid pitcher sacks to preserve the needed pollination factor of the insect while wanting to gobble it down while doing so. Some insects always are dumber than others and land in the belly part anyway. Are flowers just a place to get free food? Nah, some such as aroids, pitchers also produce heat that allows the insect to breed better, and or create secretions to ATTRACT insects to feed while devouring them, but in so doing some spiders have learned to build a web above the acid trap and steal the plants anticipated lunch. 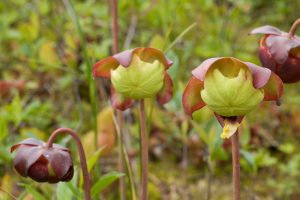 Sometimes large dark flowers also become heat traps and provide a place for the insect to overnight should it need to warm up on a cold flight, or even find refuge from enemy insects or birds.

Best of all, some plants actually trap the insect until it eats or battles its way out of it.

Plants also listen to fungi, using the mycorrhizae on their roots to communicate. Nothing new there. What is more interesting is that studies have shown that forest trees ‘share’ food to others while one is growing and the other dormant. The dormant Alder being fed by the winter active Fir. Later in the summer when the Alder is pulling in more, nutrients can be exchanged to the evergreen tree. A much different philosophy than practiced by Human beings. TREES share their goodies!!! I worry greatly about the day they have had enough of us and start using pollen as a weapon to incapacitate and get rid of us. The picture below is a cloud of pure pollen!!! 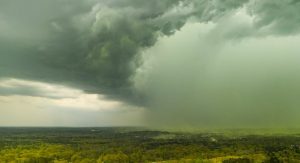 What I find interesting is that this relationship between insects (pollinators) and angiosperms is relatively new compared to the much longer period of wind pollinated plants. Mind you, our obsession with Hymenoptera ignores the longer history of the larger beetle family and other insects that originally pollinated non-flowering plants (conifers, ginkgo’s, cycads). 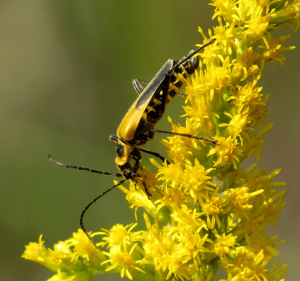 Today, bees continue to pilfer pollen off of whatever is available as long as the protein count makes it worthy of visiting. They will ignore pollen from dandelion or aster if high quality pollen is available such as pear, Brassica, clover or maple. Much like going into the liquor store and hitting the Bourbon and Whiskey before settling on some Vino.

Flies will often pollinate any flower, it need not be musky or stinky. What I especially like is that insects also developed mandibles or behaviors to outwit the plant.

Long tubes of flowers? Cut a hole into them! That said, I love the flowers that have developed shelters for the pollinator, come visit, stay overnight. The bed and breakfast model. A beetle moves in and is rewarded with pollen and sweet nectar. The most remarkable fig/wasp symbiosis is a good example of insect plant cooperation.

When insects move on, they get the pollen all over themselves and pollinate the next. Flies (Hover fly), some wasps and the bees grew hairier bodies to make this work better. Now how many interactions had to occur before the plant recognized that bees might be a better model than the beetles and adapted its reproductive to entice these newcomers?

Or did some plants also become gnarly and hostile to others and kept to the insect they had and figured out means to ban other insects? Are their evolutionary Luddites in the plant world?

As I mentioned before, not much was said about the beetle which basically is the largest insect order and probably the first among flower visiting insects. 250 million years ago. Flies and ants have their role as do moths. In most, these flowers emitted yeasty or musky odors, or even rotten smells such as  Huernia’s. 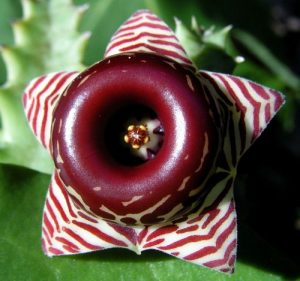