Sequim is famous for its Lavender and we have dozens of cultivars available but BLUES also include the Veronica family and some of the less aggressive Speedwell’s might be worth trying on. Veronica liwanensis  attracts both bees and butterflies. It is a low growing ground-cover and makes a great rockery plant. Veronica pectinata (Woolly Speedwell) is equally choice and the plants cover themselves with blue blooms, in early to mid-spring. ‘Blue Reflection’ Veronica (Speedwell) is another vigorous ground cover that covers its garden space with evergreen foliage and a profuse late spring display of small blue flowers. All are good xeric choices.

Sages, in the perennial garden come in later and here we have a summer dearth of nectar until blackberry’s begin. So spring flowering Salvia sylvestris ‘May Night’ might be a good beginning as it blooms prolifically with deep purple-blue flowers. It is cold hardy and tolerant of heavy clay soils. You may also want to add the more culinary Berrgarten Sage which becomes somewhat purple foliaged in sun. All sages will re-bloom if deadheaded in the first round of blooming. Continuing in the herb family we have Oregano’s Rotkugel, one of the very best ornamental oregano’s. A fantastic perennial for feeding bees and butterflies. Well suited to plant with Artemesia and Zauschneria.

Later in the season Perovskia atriplicifolia Blue Spires (Blue Spires Russian Sage) is a large and vigorous growing Russian Sage selection. This would go wonderfully with Yellow flowered plants such as Fremontia or the perennial coastal Lupine. Russian Sage also comes in many dwarf new cultivar forms. Lacy Blue Russian Sage is a true dwarf cultivar discovered in an English garden and just recently introduced to the US. Consider planting it with some of the Stonecrop sedums such as Sedum spectabilis ‘Brilliant.’

The thyme family includes workhorses such as Pink Chintz Thyme, Thymus Reiter and so many others such as thymus_coccineus. As they bloom in mid-summer they make an excellent small-scale lawn substitute. Drought resistant/drought tolerant perennial plant (xeric).

Hardy Ice plants used to be available in only a few colors. Now there are so many more. Given good drainage and sun they have proven hardy up here. Delosperma Fire Spinner or the granita hybrids are but some of the new cultivars. Ice plants can provide flowers of orange, red, yellow and lavender that are unique in the world of perennial flowers.

Monardas are often a mainstay bee plant of choice but the lesser known Agastache family are equally remarkable. Blue Blazes is a large growing hybrid hummingbird mint with lavender-purple flower spikes. Very long blooming, its flowers attract hummingbirds, butterflies, and bees making it an essential perennial for pollinators. Agastache ‘Blue Fortune’ is another one. So is Agastache rugosa Golden Jubilee’ (Korean Mint) – late summer to fall these are winners. Tango’ Agastache (Agastache aurantiaca) is a compact form that might be used in pots. All are bee magnets, especially when mixed in with Echinacea. Throw in goldenrod’s and your bee garden is a winner.

Rocky Mountain Goldenrod (Solidago multiradiata) is a compact, earlier-blooming Goldenrod. But there are many new cultivars of Goldenrods. All provide nectar and pollen for beneficial insects. Fireworks Golden Rod is taller and goes well with plantings of Aster or Erigerum. Solidago ‘Golden-Fleece’ looks great with Russian-sage. Solidago ‘Wichita Mountains is another superb cultivar.

ECHINOPS Blue Glow is a brash tall Old World wildflower that blooms in mid-summer. One of the very best flowers for attracting bees and butterflies to your garden. Drought resistant/drought tolerant plant. Another don’t mess with me group are the Eryngium family better known by their common name Sea Holly. Coastal Bush Lupines combine beautifully with either one. My favorites include: Eryngium planum ‘Blue Glitter’ which is an outstanding perennial that thrives in hot dry planting situations. It is drought resistant as well! And if you love gold and blue!!!

Mix with tall Perovskia for a dynamite combination.

More underrated and less available, penstemons belong in every garden and begin with the perennial and easy to grow Rocky Mountain beard tongue. Long blooming and long-lived, this beauty thrives in most any well-drained soil with full sun exposure.

Another late summer bloomer is the Blue Mist spirea (Caryopteris clandonensis). The cultivar  C. Dark Knight has a profusion of dark blue flowers in late summer when few other shrubs are flowering. Its modest height makes it very useful in smaller yards. It is a fantastic nectar source for bees and

In the mint family, as with the Agastache, Monarda, Beebalm should always be used. Most will attract hummingbirds and butterflies as well.

Stachys lavandulifolius (Pink Cotton Lamb’s Ear) is an amazingly xeric wildflower that thrives here in Sequim. There are many forms of Stachys. All are worth investigating. This is a drought resistant (xeric) plant.

Armeria maritima, also called Sea Thrift, is a commonly sold perennial with a profusion of light pink flower clusters that bounce atop stiff stems and are favored by honeybees. This low-growing perennial forms a tidy mat of grassy evergreen foliage and is easy to grow.

Returning to the A LIST: We find ASTERS!!! Monch Frikart’s Aster is one of the first to bloom and with deadheading will bloom from mid-summer into fall. Once established, Asters are drought-tolerant, vigorous, long-lived perennials that provide an important source of and late-season food for pollinators.

My own favorite is the tinier bloomed Aster ericoides, or Snow Heath Aster. The nectar-rich flowers are magnets for attracting all kinds of bees and butterflies including migrating Monarchs

Blue and white hardy Agapanthus are over used in California but no one can doubt that they attract bees. These hardy forms have deciduous foliage and usually will bloom in mid-summer. Two other CA or West coast natives that bees swoon over are Fremontia and the Matilya Poppy.

The Allium family should not be overlooked beginning with the common chive to more showy huge flowered forms that are knockouts. All these showy globes of lavender-pink flowers are highly attractive to pollinating insects like native bees, honeybees, and butterflies. They are also suitable for challenging sites, including dry, sandy, and rocky sites.

A few other notables include the Echium family which in milder areas can have some stupendous flower spikes. Here in the Northwest we are limited to smaller forms.

Gray creeping germander blooms with fragrant honey scented pink flowers in summer that are held over equally fragrant thin linear gray leaves. The plant is an excellent small scale ground-cover. Phlomis russeliana, a Mediterranean species native to the mountains of Syria, is admired for both its unusual whorls of soft yellow flowers and its large olive-green leaves. Commonly known as Hardy Jerusalem Sage.

Lamium, White Nancy or pink are great bee plant ground covers. May need part shade and is a great ground-cover for Hosta and such.

NATIVES should never be overlooked be they Prunella (Self-Heal), Snowberry, Ribies, Evergreen Huckleberry, Galtheria shallon and Mahonia. Mahonia come in many sizes and shapes. Please also include the majestic tall Chinese forms. Your bees will as happy as beavers in a wood chip dump. 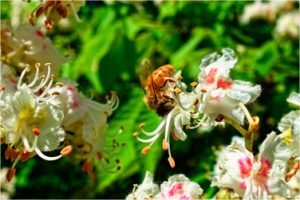 I will add another (wind pollinated) tree as it too produces nectar. That would be the Chestnut tree. The European Chestnut blooms in mid summer and I have seen my bees working it every year. Where I’m at, there are a lot of blackberries flowering at the same time, so it isn’t lack of forage that leads the bees to the chestnuts. Yes, they may be after the late pollen source but nectar is also taken. Chestnut honey is

produced in Spain and Italy it  has an amber color, with darker or reddish tones if it contains heather – most specifically tree Heaths. It is very sweet and not as acid unless it is combined with the brambles. In Galicia there are a large quantity of honeys, but the most outstanding is chestnut and heather honey. Please note how Chestnut honey fares in the Antioxidant chart. Pollen picture closeup!

5. Honeys with the highest amount of antioxidants

Buckwheat, Astragalus, Heather, Manuka, Strawberry tree, Chestnut, Carob and I hope that the native Madrona might rank up there.

DIS AND DAT! QUESTIONS:  DOES SIZE MATTER! 😛  Not when it comes to nectar.

When it comes to Pollen it does. The larger the catkins the more they attract. This applies equally to cultivars such as single peonies, Garrya or plants such as Ribies sanguineum. Cultivar selection for large flowers is constant. 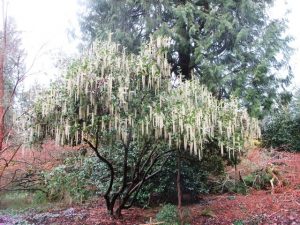 Finally we get the Natives vs. those pesky immigrants question.  Consider our neglected Ribies, until they were hybridized and RETURNED mostly be improvement by the Brits!

Or shall we try the native Mahonia and restrict hybrids with Asian ones?

To END we will pass on the evolution of wind pollinated plants vs. the dioecious with male and female flowers – to the much more RECENT evolution of CARNIVOROUS plants. It may not become an issue of humans disappearing due to lack of pollinators as plants manage to live with their often symbiotic insect friends. I await for the plant world to decide that they have had enough of humanity and its defoliants and weed killers. DEATH by tiny suction cups, acid drowning or capture by tentacles that pin us to their leaves.

“In his 1875 book Insectivorous Plants, Charles Darwin included detailed drawings of the tentacles that sundews use to pin insects to their leaves. “It’s no wonder Darwin wrote an entire book on carnivorous plants. 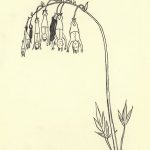