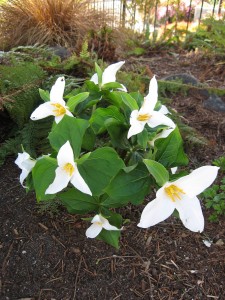 The link below was a nicely written article on dividing Trillium. I happen to disagree with the timing and had a few minor quibbles, but I have a far greater concern that this will lead to plant poaching from public or private lands.

‘Be brave when dividing Trillium.’

My concern is that most gardeners would know where their clump is, or if in a neighbors garden a photo or tag would easily ID the location. This description of taking divisions while in bloom may actually lead to further collecting of these plants in the woods or timberlines both private and public. I live next to the Olympic National Park in WA and could tell you horror stories about people absconding with native plants. The picture came from the above article. 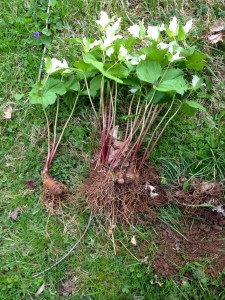 I grew much of my own collection from seed and have a word of caution on this. This should only be done only with FRESH seed collected or purchased beginning in June. What you buy as “fresh” seeds on eBay is last year’s seeds. Be it Trillium, Gentian, Hellebore you may be easily waiting for two years for germination! Trillium seeds or Hellebore needs that winter dormancy period, so if you opt to do attempt this, quit buying last year’s seeds.

The secret of successful hellebore germination is to sow the seeds as early as possible after harvest, between June and August. They should then start to germinate from November/December, otherwise it can take up to 2 years!  Sowing instructions

If you start doing seed queries – begin your search in June or July. The earlier you sow fresh seed the better the germination and timeliness of the seed to survive the coming winter. The same holds true for Corydalis, Dicentra and many more delectable plants.

Today, I am eying a friends miniature Trillium rivale ‘Brook Wake Robin’ that only grows a few inches high and I finally remembered to take a take a photo!  I will be getting some pieces of this plant later this year. 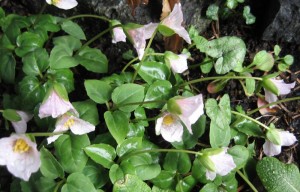 In the meantime meander through this photo gallery of these beautiful plants.