2015 Edit below! Fresh Wasabi is a highly prized culinary ingredient used in elite restaurants and sushi bars in Japan. What is often sold as Wasabi is not. This is your chance to grow and market your own, especially if you have the proper conditions for it. Normally found growing along stream banks in Japan, this semi-aquatic plants needs constant flowing groundwater to thrive. Mine is planted in spring fed gully on a hill, so it is happy as it can be. Cultural needs are flowing water, well drained gravelly river soils and part shade. Please read the following if you are interested in starting an alternative crop and have the water for it … and yes it will grow in the East Coast to ZN 6 for sure as well as the Pacific Northwest. Have fun.

I must also add that I have sold these plants to Oklahoma and Minnesota. Neither location are regions I would ever attempt to grow them in. Always consider the source of origin. Japanese/Coastal Chinese or Korean plants have a climate much different than the U.S. It is more than a climate zone COLD differences! Japan has wet warm summers and rather dry but crisp and clear winters. That is the total opposite of Sequim WA. With serious mitigation’s I have more hope for the colder Minnesota placement than I have for the Oklahoma one. Please contact me before buying these plants for a climate zone that is questionable. Some mitigation’s follow. Snowfall coverage etc. can make a huge difference, but in a Nov. deep freeze without snow, the plants would be toast. They are after all surface rooted and a 12″ soil freeze will kill them. A dry Oklahoma/Texas freeze is much different than one in the Great Lakes region!

Mitigation’s: Save one plant and re-plant into a pot for spring planting. Keep in a cool greenhouse! Do what you would normally do for the second. For the third plant. Create a semi-pond area (slope area being preferable) Put the plant into this bermed planting area (mulch) and before a good freeze …. FLOOD (six inches) it with water so it freezes over permanently. Snow cover over that should protect the roots until spring. In Spring, break down the berm to allow better drainage and hope for the best.

I had many questions about this plant. Here are some of my responses. “I’m in central Ohio. I seriously doubt the plant would survive our winters. I do have a good sized greenhouse and grow rare tropical fruit trees. I don’t let winter temps dip below 68 degrees. A good sunny day will jack the temps up though. I just wondered if it would be possible to raise some plants say under the benches to keep in mostly shade? Could I just water more often? Trying to set up something elaborate to simulate flowing water is out of the question. So this is mainly to satisfy my curiosity and I’m always looking for something new and odd to try.”

Answer: I live on the Olympic Peninsula, western WA. I have been growing them for ten years and they have survived perhaps single digit temperatures. Yes your suggestion sounds good. Here was my answer to a similar question that never made it to the listing. “They naturally grow in riparian soils, gravelly with silt, yet humus enriched from decomposed leaves. My patch is a hill seepage that has decomposed basalt rock and is well mulched by maple and alder leaves.

This is IDEAL! I have also grown them in regular nursery pots so that does work as well. My recommendation would be DEEP tree pots that have more or less an open bottom. These go into special flats that have a screen like base. Hard to explain. Shallow pots with side holes drain more poorly than those that have bottom holes and “legs.” (a space between the pot and the flat.) I added sharp grit, basalt, pumice — anything that retains some moisture yet drains. Very coarse Perlite might help as well. Another suggestion and cheap pot idea. Use a 12 corrugated drainage pipe they use in culverts. Public works people often have scrap left around and they can be gotten cheaply. Place on base, made of 1/4″ screen and 1×4 wood. Set this on top of some bricks so there is air beneath.” 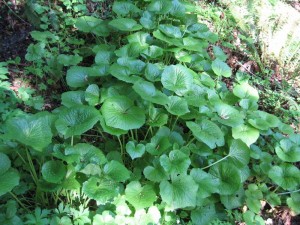 Most western gardeners – have never grown Wasabi . This is partially due to lack of starting material and the special growing niche it needs to succeed.

As a native to Japan (hence the name Japanese horseradish) these tubers can tolerate most conditions but prefer shaded, moist but well-drained areas for success. The stock planting was in a poor clayish soil that was a drainage channel for a small spring. Part shade is a must as light isn’t a big factor in their growth, water is. So, if you have any damp, shady areas within your vegetable patch then you’ve found the ideal tenant. The large ornamental leaves make it focal point. Best of all it does not seem to attract pests. My following observations come from growing it in containers!

Hydroponic gardeners will find Wasabi a snap. Mind you, payback on harvesting is a much delayed process as it takes up to two years before the roots are sizable to be dug up. This explains the high cost of the finished product.

Growing Wasabi from seed is difficult for not only are they hard to find but even old patches such as mine rarely produce seed. Starting stock is near always the tubers and they are best shipped bare-root in early fall.

My planting in this wooded area was ideal and the slope provided a permanent well-draining environment. The same property had moist channels in which skunk cabbage thrive but boggy and poor draining soils would soon kill the plant. I suspect that coastal CA to S. WA provide ideal growing conditions and some areas in the Southeast or Blue Ridge Mts. would do so as well. Minimum temperatures might be a factor, but wooded areas provide ample leaf mulch material and if the plants get that cover they may well survive cold snaps as long as the soil doesn’t freeze solid. The moving water helps in this as well.

As indicated before planting on a well-watered or moist slop is ideal as drainage is the most important criteria next to temperature regulation and the avoidance of direct sunlight or desiccating winds. Use of drip systems or foggers is something to be considered.

As mentioned before, it takes about two years to develop useable tubers. By this time the plant should be about the size of a large Hosta, about two feet tall and wide. Only at this size will it start putting its energy into the horizontal carrot like root. If happy they should be some 6 to 8 inches long. When harvesting always leave young plants to replace what you have removed … call it a planned rotational system.