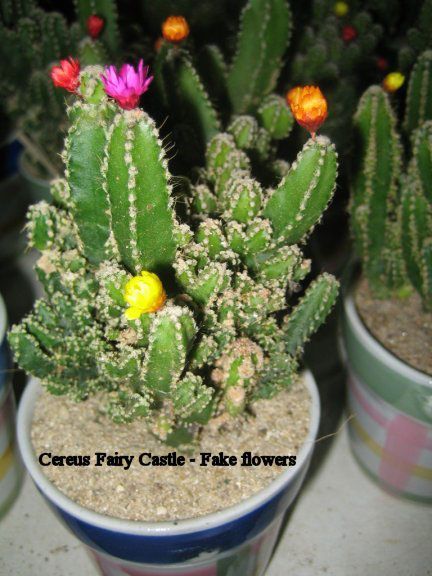 The Amazing and weird Cactus Strawflower phenomenon begins at Wall Mart and Home Depot.“So I just bought a small cactus with a flower on it, but the flower looks a bit weird. Is the flower supposed to be attached to it with this clear substance? It looks like the flower was just hot glued on. I just wanted to know if this was unusual or not?”

DUH! It’s glued on, not natural at all. A lot of suppliers put flowers or eyeballs on to make the cactus more attractive to buy. If the plant label says strawflower it means that it is a glued on flower.

Mind you I find it the addition of accoutrements such as top hats, eyes and noses a measure of respect. How many other plants get that treatment? 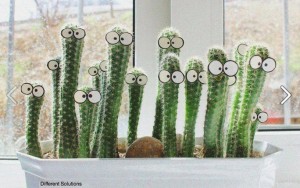 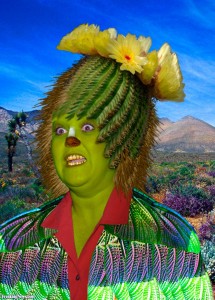 Most websites discuss ‘Normal Cactus’ and ignore the fascination for cristate or witches broom cactus or shall we call them October Monster Succulents. ‘Monstrose’ mutations are not unique to succulents, but they certainly seem to be much more common in the succulent family than they are in most other plants such as conifers. As such they are widely sought after and usually command a premium price. 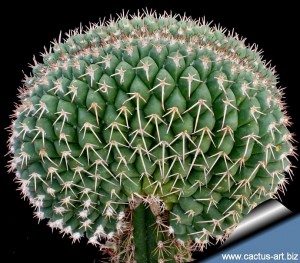 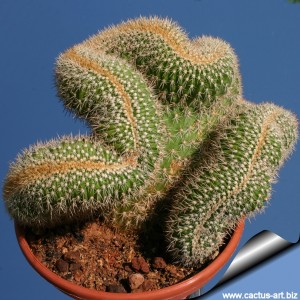 Mind you this condition is not unique to cactus. Many dwarf conifers were first discovered as witches’ brooms growing high in the branches of their parent trees. These witches’ broom develop because of a genetic mutation. When cuttings are taken, new plants so propagated have the characteristics of the mutated original. The dwarf spruce Picea pungens ‘Montgomery’ and Bird’s Nest Spruce (Picea abies ‘Nidiformis’) are two commonly propagated Nursery cultivars. The term witches’ broom comes from the German word Hexenbesen, which means to bewitch.  Japanese Maples are another hot item to go after these oddities.

Going a step further in ‘weirdness, the genetic chlorophyll lacking mutant Gymnocalcium takes the cake. Only by grafting them onto healthy rootstock will they live. 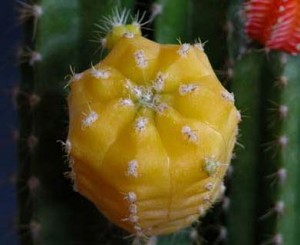 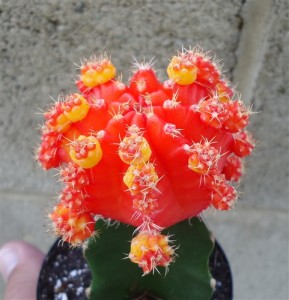 “Gymnocalycium mihanovichii is commonly known as ‘Hibotan’ or “Moon Cactus”. This variant occurs when the plant lacks chlorophyll and the body color manifests as beautiful red & yellow, rather than the typical green. It was discovered that these beautiful seedlings could not survive as they did not have “chlorophyll” and were therefore incapable of producing the necessary chemical changes that are involved in photosynthesis and which are necessary for the production of the “food” that is necessary for the plant to grow and thrive.” By grafting these genetic dead ends onto normal plants it was discovered that they could survive. Mind you some that still have chlorophyll will survive on their own and there are some remarkable bi-colored forms available.

As for plant rumblings: Go to Monticito Nursery and their patented embalming of live house plants with a die and glycerin process to replace the living essence of the plant to make them last forever. “Montecito Naturally Preserved Plants are real eucalyptus plants, bushes and trees that have been grown, harvested, and processed in a non-toxic formula to preserve their natural beauty, our special blend of colorations, and the softness of natural leaves.  These preserved plants and bushes are permanently preserved but will look their very best for 10-15 years.”

I thought this would be a good way to mummify humans after their demise. Rather than formaldehyde the corpse, dye and glycerin them and let the family keep you around. Perhaps even rent you out for Halloween. I always could use a good tan dye. That said some actors such as George Hamilton even use it while they are alive. 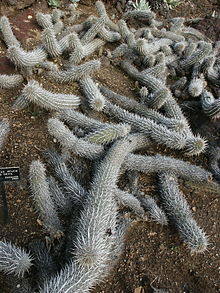 I only pray that the ambulant walking cactus of Baja, CA doesn’t come after the CEO’s of these companies. The “walking cactus” (Stenocereus eruca) is a truly unusual form of cacti. It lives on the Baja peninsula, and is also known as the “creeping devil.” Sadly it will take hundreds of years before it enters Hollywood.