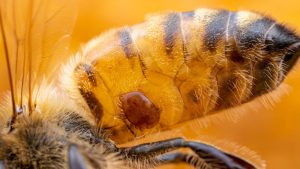 Varroa destructor mite, as well as other wing deforming mites weakens bees and generally beekeepers have attempted to use organic pesticides and or acid treatments to weaken this destructive creature. Most agree that the mites as in agricultural applications soon become resistant to such pesticides. This following bioengenering story is one alternative option that some scientists have turned to. It involves  a process called RNA interference that would modify the bees more limited gut bacteria .

The idea of engineering a gut microbe certainly does have “enormous implications,” but the caution remains that:

It may mutate further and would certainly spread to hives in the wild. And as the article further cautions, it may end the Varroa issue in the here and now, but only until the Varroa mites develop a resistance and adapt. 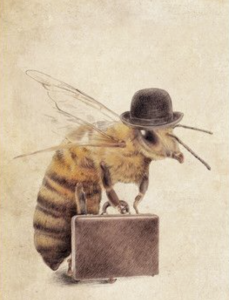 Or as this old fashioned luddite beekeeper sees it … the FINAL STRAW.

This Frankenbee might well develop problems with this genetic modification and it may only show up in a few generations down the road. The ‘safe’ organic Neem oil works on a genetic level and its effect on insect larvae last generations.
In my opinion, nature and Darwinism will have an answer to this parasite eventually …. and one should never forget that this problem has mostly arisen  from our crappy ‘for profit’ beekeeping of the modern era. Transportation and crowding of hives for pollination fees $$$ are the main issue. 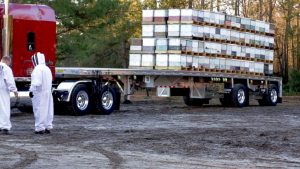 Old fashioned, home nurtured bees have less of a problem and then only when we come into the importation of queen bees from a limited gene pool. Locally we import hundreds of packaged bees every year and most of those do poorly in the first year and further dilute the existing natural stock that may have adapted to the local conditions and practice successful survivor hive hygiene. 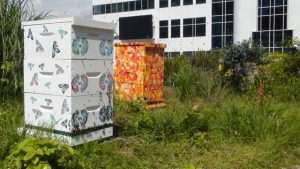 Should this be the answer I respectfully suggest that modifying gut bacteria in humans to digest cellulose might be a more logical step. It would save a lot of trees and have the bonus of allowing us to eat the print not fit to read.
Basically I much prefer to suggest that we need to modify and tinker with human genomes first!  If we fail there, no biggie. nature would applaud.
Of course the scientists doing such research may well be hooked into the money trough that the big pharma/ag companies can pay out. The Monsanto/Bayer connection could  just as easily modify the bees to be able to survive the Roundup or  Neonicotinoids that they flood the world with.

I think this is a totally logical plan and for the the ag/pesticide industry an equally realistic future. Same would apply for butterflies, though there is not an economic incentive to keep them around.
(Visited 12 times, 1 visits today)