How long? That’s easy! Bees live until they die.  🙂

That certainly is true but much depends upon their sex, their role in the hive and when their life cycle begins.
There are three basic castes of honey bees in a hive. More differentiation exists. Female workers make up 85 percent and do all the hard work. Well, that is if you think the Queens laying 1,000 eggs or MORE per day is not. 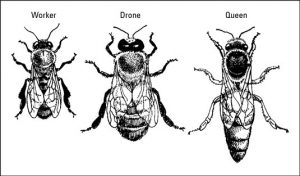 Point is, EVERY worker bee is female – the woeful males aren’t good for much of anything but mating and even that is not as much fun as it might be.

A few other salient points. Worker bees: those that flit from flower to flower gathering pollen and nectar will average some 500 miles of flight before her wings give out and she would fly one winged if she could.
Depending upon the time of the year a worker bee can live for half a year or as little as one month. Workers raised during the busy spring or summer months may live for 6 or 7 weeks but workers raised in the autumn basically have little work to do but keep the hive warm and ready for the next year. These may live 4 to 6 months. 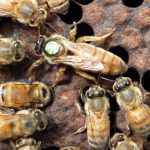 The Queen on the other hand (BTW – she has a smaller brain than the workers) will live for years and will be capable of laying eggs for 3 or 4 YEARS – all as a result of one mating flight in which she will mate with up to 20 drones. That flight out will last a lifetime as the stored sperm will be stored in her body and be used to create fertilized eggs for about three years.

In one year she can lay over 30,000 eggs which amount to egg laying day and night every 20 seconds.

Meanwhile the ever-cautious worker bees are preparing for a new queen creating queen cells to replace the existing queen. This has less to do with the queen getting old and worn out, but more of an insurance policy should she die for some reason. An emergency queen is only a few days away.

The Drone is the final member of this caste driven society. A hive usually has a few hundred and their primary job is to mate. They have neither stingers or any way to forage food. With Varroa mite, a second job seems to be attracting mites and once infected they are quickly kicked out. A cold but interesting way to deal with the disease of parasites.

Bees do not have Senior Citizen housing or a conscience when it comes to evicting the worked out female or the food devouring Winter drone. When winter comes knocking on the door or if food is in short supply the drones are evicted. They don’t last very long.

Their mating process is however explosive:

Mating occurs in flight, which accounts for drone’s needing better vision, which is provided by their large eyes. Should the lucky drone succeed in mating, he soon dies because the penis and associated abdominal tissues are ripped from the drone’s body after sexual intercourse. So the drones mate only once and die shortly after the happy deed. The leftover penis remaining in the queen’s vagina is referred to as the “mating sign”. The plug will not prevent the next drone from mating and the queen might well accommodate up to 20 matings.

It is very interesting to observe this culling process at work. Once the mating is done the surplus hive drones are superfluous except as mite catchers and are evicted.

Ruthless behavior. I feel for the drones. It reminds me of a past relationship! Drones are like ex-husbands. Kicked out like trash after they serve their purpose.

I still have not seen a drone ‘congregation.’ This is like the local pub in the sky where on warm and sunny days, sexually mature drones, congregate with other drones in the air, to form a cloud of bees. There may be hundreds or even thousands of drones waiting their chance above a crowded apiary.

Getting to first base? Talk about bad odds, this is about the same odds as the
State Lottery.

Using pheromones and sight, drones follow the virgin queen in a comet-like swarm each and every one is competing to approach and mate with the queen and every drone that mates will DIE.

except for the fact that despite the karmic consequences Beekeepers have added their own refinement to this droneicide. By inserting a full comb of (see Soylent Green) foundation we encourage the workers to make thousands of drone babies which the beekeeper then removes, bags and puts in the freezer overnight.
This kill is then thawed and the decapitated cells are returned to the hive for the workers to clean up and is repeated as long as Varroa mites plague the hive. You can also let your chickens or birds clean out the comb.

The frozen comb does kill the mites as well as the larvae. Brutally murdered, but as with the alternative of poisoning, the hive with chemicals creates weaker bees and stronger Varroa.

An alternative to the purchased plastic drone cell is to use your old comb cell and make your own – a disposable one OR make an Oliver trap frame – super article here!!!

No freezing or extra work is required, feed the birds or chickens and process the wax. I would return the frame to a third slot position.

While I am at it – attractive homes might make all the difference.

The life cycle of a baby bee! 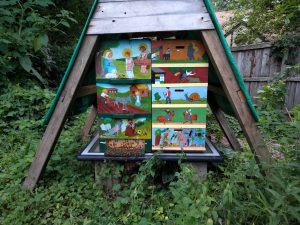