We all appreciate that some plants have scents that delight the human nose. Sadly we are mere Jimmie-come-late lies to a relationship that began between plants and insects. A relationship that is some 150 million years older than our own.

Some are mechanisms learned. Scents are one, as on early morning or late evening flowers generate extra heat to make their scent more powerful. Cold sluggish bees associate this aroma with a relished snack of warmth as well as the promise of nectar or pollen. On cool days this is an added incentive to come hither first, thus furthering the plants chance of being pollinated and setting seed. Extra heat in these expanding hours of the day, also encourages the bee to lengthen her workday and service her.

Tricky little things aren’t they! Their manipulation and cultivation of human beings is ongoing. That is why I avoid having any plant in the same room with me. Outdoors, I trust them, but not when I close my eyes. 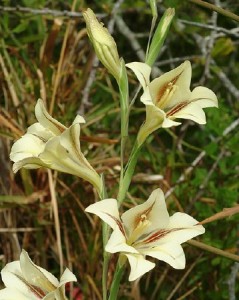 When little Gladiolus tristis flounces her sexy ways, it’s out the door with her. No watering, no pollinating from me. Let the bugs have her, I say! Those flowers that do not have scents use other tricks to fool the insect. Many plants such as Forget-Me-Not’s, Tradescantia, Pulmonarias, Yesterday-Today-And Tomorrow fade from one color to another and are educating the bee to be receptive to them. “I am more attractive,” “I have pollen or nectar.” Don’t come back when I’m feeling blue.”

Actually, bees like both colors. Blue to Pink, or vice versa. No matter, but upon returning to the hive, they chat with the rest of the gals. “This is a great plant but go for the pink first, and leave the other color alone.” The faded color, of course is older and contains less nectar or pollen.

Mimicry is another tool plants use in the pollination game. More here: The faces of orchids.

Male bees are never told anything. Generally, they are but viewed as future flying sperm sacs. Worker bees however, tend to work on very specific nectar sources at certain times of the day. It was always fun to label shallow supers as to what plants they were working upon. I used to do this on a daily basis, making notes as to what was blooming and being worked. Poison Oak, for example made a great honey, and eating it may have made me partially immune to the plant. Then again, harvesting over a ton of honey made mead that I consume much honey.

Maybe that is why someone addressed me as SUGAR today. Gee, I don’t think anyone ever called me that. Guess she meant that dark brown congealed stuff.

Today I go through SOME of my many bee-keeping adventures. A hobby my ex-wife never fully appreciated: I thought that having 6 hives on the back porch was delightful as well as aromatic. For some reason she did not. Nor was she happy when I did not clean up the honey extraction efforts in the kitchen before going back to work. How was I to know that the robbed hive would  follow the scented trail down the chimney – through the wood stove and perish writhing on HER kitchen floor? I don’t even think she needed the phone to scream for my return, now safely I thought back at the Garden Center ten miles away.

I would add that other home miss-adventures would happen as well. Hives always need to be moved very carefully. Either one moves them miles away or by the foot. If not done in that manner they will try to return to the previous site. One evening I deleted some of these ‘offensive to wife’  hives and took them to my mothers property. I now only had three hives left on the deck and I began to slide them away from the porch door… one foot at a time. As fate would have it, a popped up nail caught the bottom of the hive and the bottom board became detached.

Doing this with no shoes and shorts may have been questionable at best. Needless to say, the inhabitants were upset. With bees crawling and stinging up my nether regions I nonetheless re-connected the body parts of the hive before diving through the porch door, through the house and exiting from the front entrance. I striped and dislodged most of the bees and discovered that I suddenly had a much larger member. And that was decades before Viagra. 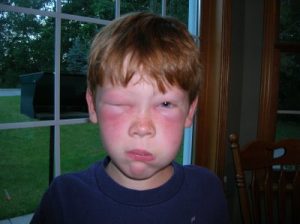 Now the picture to the left is not me but it does offer a minor reflection as to what happened to me when I tried to rescue a stray colony that was parked  above the door of Penny’s In Santa Cruz.

I was always willing and eager to respond to the call of wild bee swarms and the Ag. Inspector would call upon me often. COOL! I responded to one call and went to check out the swarm before getting my smoker and gear. To test their level of belligerency I gave the rather large swarm a gentle but breathy kiss. 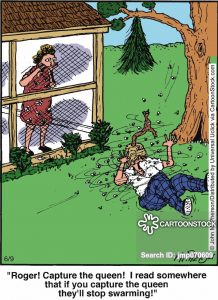 The swarm responded by detaching themselves and settling down on my face. With customers gawking,  I dove through the open window of my truck, cranked up the window and began to swat. My enthusiasm about this call had run its course, so I returned to the nursery to continue working. One eye remaining open is good enough, or, so I thought. Vallie, my dear assistant manager took one look at me and told me to get lost. ‘GO HOME!’ “WHY?”. — Her concern was that I would scare of all the customers. Actually, she said … ‘You’re UGLY!,” and I believe she added some Gargoyle references. 😈

Damn, I followed her advice, but I was now in full hunting spree. I returned home and gathered all the equipment lacking before and a spare hive. Caught the swarm and took them to my sweet mother.

Mom was always glad to see me, no matter how I looked or what I brought home.  BTW – add lips swollen to a Homer Simpson level and you would get a better picture. Even a long necked glass of beer could barely pass through those lips, yet I had a very viewable pair, looking down at them. Vallie may have been correct in her assessment those many years ago. 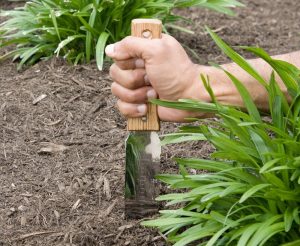 The Japanese Hori Hori digging tool is known by some as the ‘ultimate gardening tool’.

The same thing happened many decades later. While ground weeding for a client I jabbed my Hori- Hori weeding knife into a ground hornets nest. Having one’s mouth gape open at such a time is never a good idea and before I could snap it shut, I had dozens of stings on my lips and inside my mouth. By the time I got to my best friends house (Dumpster) I had swollen up even worse than before. His dear wife near fainted, while he ran off to get his camera. I gave up and returned home to some long necked cold beers. 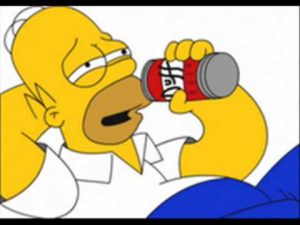