OSCAR ESCAPES!!
Flew the coup to speak and was last
seen heading towards
Manzanillo, Mexico
By now some of his plumage has regrown and he has been up to all sorts of activities.

The latest picture we had of him 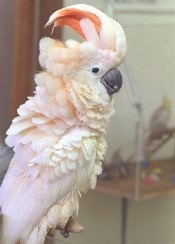 I am sure that Oscar is a Moluccan or Salmon crested cockatoo and it is still heart breaking to know what this child  once looked like in all its glory before it became a picker or got beak and feather disease (which was believed to have no cure.)  So what is going on?  The Salmon-crested Cockatoo also known as the Moluccan Cockatoo, is a bird endemic to the  south Moluccas in eastern Indonesia

After a romp in Mexico, has Oscar become the Che Guevara of all ‘bad’ Parrots or is he simply enjoying the warmer climate? do let me know.  For that matter –  is he trying to return to the  birth country where he was captured? Has he been so radicalized by his false incarceration that he now makes the Kea Parrot look like Shirly Temple or like one friend suggested, he escaped through the  Fly Free Bird Amnesty people. Or as Jan suggested he was converted by the Mormons and was smuggled out and has been ‘born again.’ He certainly was not helped by this group!

I had previously written that –
Oscar may not be the best representative of bird intelligence
but the following u-tube links may surprise you! It’s hard to believe this kind of beauty still exists anywhere. Watch and enjoy.
Be sure to click on the icon to expand the videos to full screen.

The New Zealand “bad Parrot      Simply a surprise bird story.     and one more.

By the 1980s the Moluccan Cockatoo was being unsustainably trapped for the wild bird trade, with an estimated 74,509 individuals having been traded between 1981 and 1990. Although international trade apparently fell to zero in the 1990s there is still much local, illegal trade with Indonesia. Other threats to this species include logging, hydroelectric projects, human settlements and habitat fragmentation.The World Parrot Trust has been supporting the unique work of Project Bird Watch, which is encouraging the protection of key Moluccan Cockatoo habitat by sustainably harvesting Moluccan nuts.

To learn more about our efforts to help Oscar or to  save this specie visit this great site. For those who would write about the how, what and where of Oscars adventures. Do use the comment form. My own tail is on the dark side and I would like to have something to balance it out.