Oscar has made his way to Mexico. I would like to know more about the how, where and why of it.  Who helped him and what became of him? My own tail is on the dark side and I would like to have something to balance it out.

MY character is the dark Marlin Brando or Charles Bronson type. Black leather jacket, revolutionary and looking for revenge.
Then there is the ‘Born Again’ Oscar, saved by missionaries who now uses his voice to preach to the media for change.
Or has Oscar become a reclusive – simply not wanting to be found. Monk like, he has found a cave to burrow in.
The Ralph Nader Oscar. Rescued by do-gooders, he is now saving the birds by legal means. Not a bird brain at all.
The Sexy Oscar.  Once released from prison all of his hormones kicked into gear and he is out to get his nookie.
A Sybaritic Oscar. He loves to sing and takes off to regions Liberace never went. A rhinestone character indeed.

MY own (beginning) will be offered on the next page.  Feel free to add to it. It may become a joint construction. All other contributions will be shown on separate pages as story lines. I will give the best a lovely rock, slab, plant or something. Do contribute. It should be fun! I hate being a worry wort but there is always a secondary ending. Oscar, back in jail.
This time in Featherworth, Kansas. 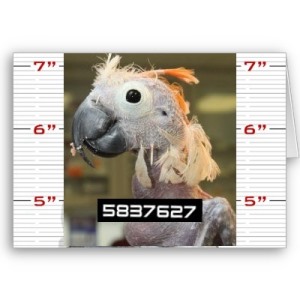 For those who would write about the how, what, when and where - or FUTURE of Oscars adventures please use the COMMENT form.